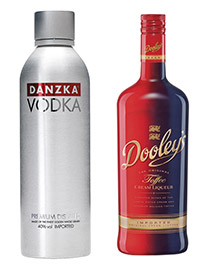 The Waldemar Behn is featuring its award-winning brands DANZKA Vodka and Dooley´s the Original Toffee Cream liqueur on its stand H52, Green Village at the TFWA World Exhibition in Cannes.

For DANZKA Vodka, the company’s flavour sensation DANZKA Vodka Apple continues its strong reception wherever it is released, with particular success in South America, Europe, and Asia. The 40% apple vodka, launched one year ago at the TFWA World Exhibition in Cannes, is the first new flavour for DANZKA since CRANRAZ was launched more than ten years ago, and serves as a natural addition to the DANZKA Vodka portfolio of premium Danish vodkas.

DANZKA Vodka continued its global rollout throughout the year, adding a number of key new listings in important international markets. The award-winning vodka is now available in Sydney with GEBR. HEINEMANN at Sydney Airport. The full range of DANZKA Vodka is available, as well as at Delhi and MUMBAI International Airports. DANZKA is now also listed in Muscat, adding to its presence in Asia, Europe and Latin America. Further enhancing DANZKA at the POS, Waldemar Behn has introduced a new DANZKA Vodka Twin Pack featuring two one-liter bottles, which can be customized by retailers upon request. New shelf-talkers may also be available, as well as customized displays.

“We have been very focused on developing new sales support tools for the trade; on packs, twin packs, displays,” says Torben Vedel Andersen, Global Sales Director.” It is of big importance to stand out in the store and look attractive to the consumer – this work will continue. We are the best travelling Vodka in the world and wish to enhance this at all times,” Andersen added.

Dooley’s The Original Toffee Cream liqueur has strengthened its position during the past year in Europe, Asia, and South America. In an exciting new development, the company has added a luscious new flavour to the Dooley’s family: Dooley’s White Chocolate with Wild Berries. The delicate blend of finest Dutch Cream, White Chocolate and Premium Vodka is receiving high marks and gaining fans around the world.

Waldemar Behn is also featuring BLAVOD – PURE BLACK PREMIUM VODKA, with new packaging emphasizing the uniqueness and premium quality of the brand. The black vodka gets its unique colour and flavour from black catechu, which is extracted from the bark of the Acacia tree in South East Asia. BLAVOD allows amazing, eye-catching cocktail creations due to the black colour.

Spirits fans can also now discover all of Waldemar Behn’s award-winning brands at the company’s new and expanded website www.behn.de. The site features the history of the family-owned company which was founded in 1892 and today is one of the few remaining independent spirits companies in the world, with a growing international and travel retail business. The website also offers an array of exciting and innovative recipes from the company’s growing portfolio of unique spirits.